Bruce Lee's "Wisdom For The Way" 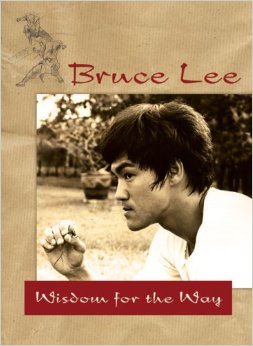 “I do not teach style anymore… Style tends to separate man." - Bruce Lee”

At some point in Bruce Lee’s insanely successful and inspiring career, he sustained an injury that put him out of commission for more than just a little while…

While he was in recovery, though, he used his timely wisely. He read tons and tons of books about life and the universe. He studied some of the great philosophers. He expanded his knowledge so much, that it led to a new outlook on life.

Listen via the player below, or scroll down to continue reading.

His new way of looking at things led to several books. Today, we’ll explore a few of the knowledge bombs from one such book, titled Wisdom For The Way

”What you habitually think largely determines what you will ultimately become.”

”You will never get any more out of life than you expect. Every man today is the result of his thoughts of yesterday.

Earl Nightingale—a guy credited as one of the founding fathers of Personal Development—says that the single biggest realization of his life was this:

We become what we think about.

… Morning, noon, and after dinner—we become what we give our thoughts to all throughout the day.

Right about now, yah might be thinking, “how’s it make sense that I could magically become what I think about?”

Let’s say you want to drop a few pounds of belly fat—that’s a thought, right?

Now, let’s say you got really clear about (a) how much fat you wanted to lose, (b) why you want to lose it, and (c) what you’ll do to make it happen…

You just thought out three things you can do to become what you thought about—a slimmer, more physically fit version of yourself.

The result? You BECOME what you THOUGHT about (yes!)

But we’re not done just yet… Another important idea Bruce Lee mentions is this:

”If you spend too much time thinking about a thing, you’ll never get it done.

Some people call this “analysis paralysis” … aka: perfectionism … aka: fear of failure.

Bottom line? Think about what you want. Envision yourself succeeding as often as you feel like it. But—and I really want to emphasize this one—DO NOT overthink every little detail when it’s time to take action. I’ve been there… the only thing that comes of it is more hesitation, more waiting until “it’s perfect”, and more excuses to make ourselves feel better about being too afraid to do what we know we need to be doing to move ourselves forward in life/work.

”A goal is not always meant to be reached. It often serves simply as something to aim at.”

The key idea with this knowledge bomb is this: it’s all well and good to aim high. Often times, setting desirable + difficult goals contribute to our achievements—even if we fall short or don’t achieve exactly what we were aiming for initially … often times, we become more resilient as a result of pursuing big giant goals, and perhaps just as often, end up going farther than we would have if we set the bar lower.

Challenging goals push us to become better, whereas easy ones don’t.

”The mind is like a fertile garden —it will grow anything you wish to plant— beautiful flowers or weeds. And so it is with successful, healthy thoughts or negative ones that will, like weeds, strangle and crowd the others. Do not allow negative thoughts to enter your mind for they are the weeds that strangle confidence.”

Just for fun, checkout this old-school interview, in which Bruce Lee reveals a few of his philosophies.