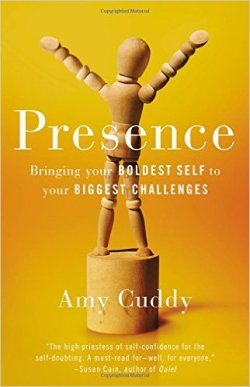 “The research I’ve been doing for years now joins a large body of inquiry into a quality I call presence. Presence stems from believing in and trusting yourself—your real, honest feelings, values, and abilities. That’s important, because if you don’t trust yourself, how can others trust you? Whether we are talking in front of two people or five thousand, interviewing for a job, negotiating for a raise, or pitching a business idea to potential investors, speaking up for ourselves or speaking up for someone else, we all face daunting moments that must be met with poise if we want to feel good about ourselves and make progress in our lives. Presence gives us the power to rise to these moments."

Amy Cuddy is best known for having delivered the 2nd most-watched TED talk in history. The talk is titled, “Your Body Shapes Who You Are”—definitely worth watching if you haven’t already done so.

Cuddy wrote this book to help people of all walks of life develop a strong sense of presence—a quality that helps us:

We’ll talk more about how presence helps us lean into the aforementioned qualities in the following few big ideas from the book, so scroll down to check it out!

Presence: Bringing Your Boldest Self to Your Biggest Challenges

by Amy Cuddy • Get the book • Get full book summary

Expand your power by expanding your body

“As scientists, the first thing we needed was a clear hypothesis. This was our thinking: if nonverbal expressions of power are so hardwired that we instinctively throw our arms up in a V when we win a race—regardless of cultural background, gender, or whether we’ve seen anyone else do it—and if William James was right that our emotions are as much a result as they are a cause of our physical expressions, then what would happen if we adopt expansive postures even when we are feeling powerless? Since we naturally expand our bodies when we feel powerful, do we also naturally feel powerful when we expand our bodies?”

This is one of many profound insights Cuddy presents about how we can use our physiology (our bodies) to increase our power and presence.

There seems to be what researchers refer to as a “bidirectional” relationship between feeling and behavior:

Bottom line? Expanding your body language, or carrying yourself in a more expansive way can actually make you feel more powerful. (Wow!)

This insight isn’t just theory either. It’s been tested and proven. In one study, individuals were split into two groups.

After just two minutes of posing in the aforementioned positions, the results of the participants in the sample study were as follows:

How could this be possible?—How could a simple set of 2-minute body poses contribute to such a dramatically different set of biological responses? In scientific terms, this pattern is called dual hormone hypothesis:

"…the smaller the device, the more we must contract our bodies to use it, and the more time we spend in these shrunken, inward postures, the more powerless we feel. Our findings uncover a cruel irony: while many of us spend hours everyday working on small mobile devices, often with the goal of increasing our productivity and efficiency, interacting with these tiny objects, even for short periods of time, might reduce assertiveness, potentially undermining our productivity and efficiency. If you must spend long stretches in front of a screen, which many of us do, be sure to choose a device carefully and configure your space to allow for the most upright and expansive posture.”

Go to your local coffee shop on a busy day, and you’ll probably find 80% of people hunched over their tiny little smart phone screen.

Regardless of whether they do it while they’re sitting or standing, this hunching-over-screen habit is NOT contributing to their sense of presence.

In fact, it’s impairing their ability to expand, thus contributing to powerlessness.

It’s actually quite obvious when we think about it: hunching down at a smart phone screen produces an inward stance; when what we’re really looking for is an expansive stance.

If you’re looking to cultivate more presence, power, and a sense of genuine connectedness with other people, then stop hunching over and tapping away at your smart phone all day long. And start being more present by putting away the smart phone, straightening out your posture, and expanding your stance a little more often.

“As most of us know, stage fright can feel like a paralyzing overdose of anxiety. And what do people tell us to do when we’re anxious? They tell us, with good intentions, to calm down.

As it turns out, that might just be the very worst thing they can say. You see, anxiety is what psychologists describe as a high-arousal emotion. As I’ve explained, when we’re anxious, we occupy a heightened state of psychological vigilance. We’re hyper-alert. Our hearts race, we break out into a sweat, our cortisol may spike—all of these reactions are controlled automatically by our nervous system. And it’s virtually impossible for most people to shut off that kind of automatic arousal, to abruptly de-escalate it. Not only can we not calm it down, but when someone tells us to calm down, it also reminds us of how calm we are not, which stokes our anxiety even more."

…Cuddy then cites the work of Harvard researcher, Alison Wood Brooks, and goes on to tell us about another high-arousal emotion that’s actually not so negative at all; and is in fact, quite positive—excitement:

"Brooks predicted that we may not be able to extinguish arousal, but we should be able to change the way we interpret it. So rather than fruitlessly trying to change the arousal level of our emotional states from high to low, what if we try to change them from negative to positive? From anxiety to excitement?”

Quick tip: next time you’re stressed out of your mind about something, and someone tells you to “calm down,” just go ahead and slap em’ straight across the face.

Seriously though, as it turns out, trying to “calm down” in stress-inducing situations (ex: getting ready to deliver a speech) will NOT help you minimize the nerves or the anxiety you feel because of the situation you’re in.

I repeat: telling ourselves to “calm down” doesn’t help us to calm down.

So, the actionable insight from this big idea is clear: when you’re stressed out of your mind,

Side note: I actually did a podcast episode on this very topic. Check it out here or listen below.

All right, back to business…

Instead, try to change the way you interpret/experience that situation from negative to positive, by saying something like: “Yes! I’m super-pumped and excited about this right now because my body’s giving me all of the energy and intensity I need in order to succeed in this moment! I’ve got this baby!”

So next time you get nervous or stressed, just remember to feel the fear and use it as energy to get yourself excited and enthusiastic and ready to dominate the situation!

As Cuddy advises, next time you’re faced with one of these tense moments:

“imagine approaching it with confidence and excitement instead of doubt and dread. Imagine feeling energized and at ease while you’re there, liberated from your fears about how others might be judging you. And imagine leaving it without regret, satisfied that you did your best, regardless of the measurable outcome. No phantom to be chased; no spirit under the stairs.”

Fake it until you become it

“In the first month after my TED talk posted, I heard from an Olympic swimming coach who explained how he’d been using a power posing-type strategy—with great success—for years: encouraging some of his swimmers, beginning on the morning of the race, to physically behave as if they’d won their events. Swimmers, as he pointed out, are notorious for their use of dominant body language in the moments before races, not only to signal their power to their competitors but also to loosen their muscles and pump themselves up. Sometimes they will literally pound their chests, like gorillas. But the approach this coach used—encouraging swimmers to adopt ‘alpha’ nonverbal postures from the minute they wake up on race days—was most helpful to swimmers who’d been thrown off by a poor performance or who were feeling a wave of insecurity and self-doubt.”

Arnold Schwarzenegger once had breakfast with one of his main competitors, Lou Ferrigno, prior to facing off for their big bodybuilding competition. Ferrigno’s parents were also at the breakfast table.

Eventually of course, they got to talking about the competition. And when Arnold was asked about how he felt going into it, he said he’d already called his mom and told her he’d won!

This is an excellent example of what Cuddy tells us we need to do—We need to fake it until we become it.

This shouldn’t be misunderstood as a free pass to manipulate others, but rather as a mental trick (or “hack”) of sorts that we can utilize in order to tap into our personal power and unleash the bravest, boldest, highest version of who we really are—who we’re meant to become.

In order to be powerfully present, we need to be able to reflexively recall meaningful moments from our past—the moments in which we were truly showing up as the best version of ourselves. The moments that made us feel bold and brave and authentic. In order to do this, it’s important to write out how this bold version of ourselves THINKS, WALKS, and TALKS, because doing so will activate your nervous system to bring those powerful feelings into the present … And after all, isn’t that why you were interested in the big ideas from this book in the first place?

Here’s a closing quote to bring it home:

“if power reveals, then we can only know the truly powerful, because they are bold enough to show who they are without subterfuge and without apology. They have the courage and the confidence to open themselves to the gaze of others. In that way, the path to personal power is also the path to presence. It’s how we, and others, discover and set free who we truly are.”

Hope you enjoyed some of my favorite big ideas from the book!

If you wanna dive even deeper, feel free to checkout the full version of this book summary here.

If you like listening to the podcast, would you mind leaving me quick review on iTunes?

Get your self-improvement questions answered on the podcast.