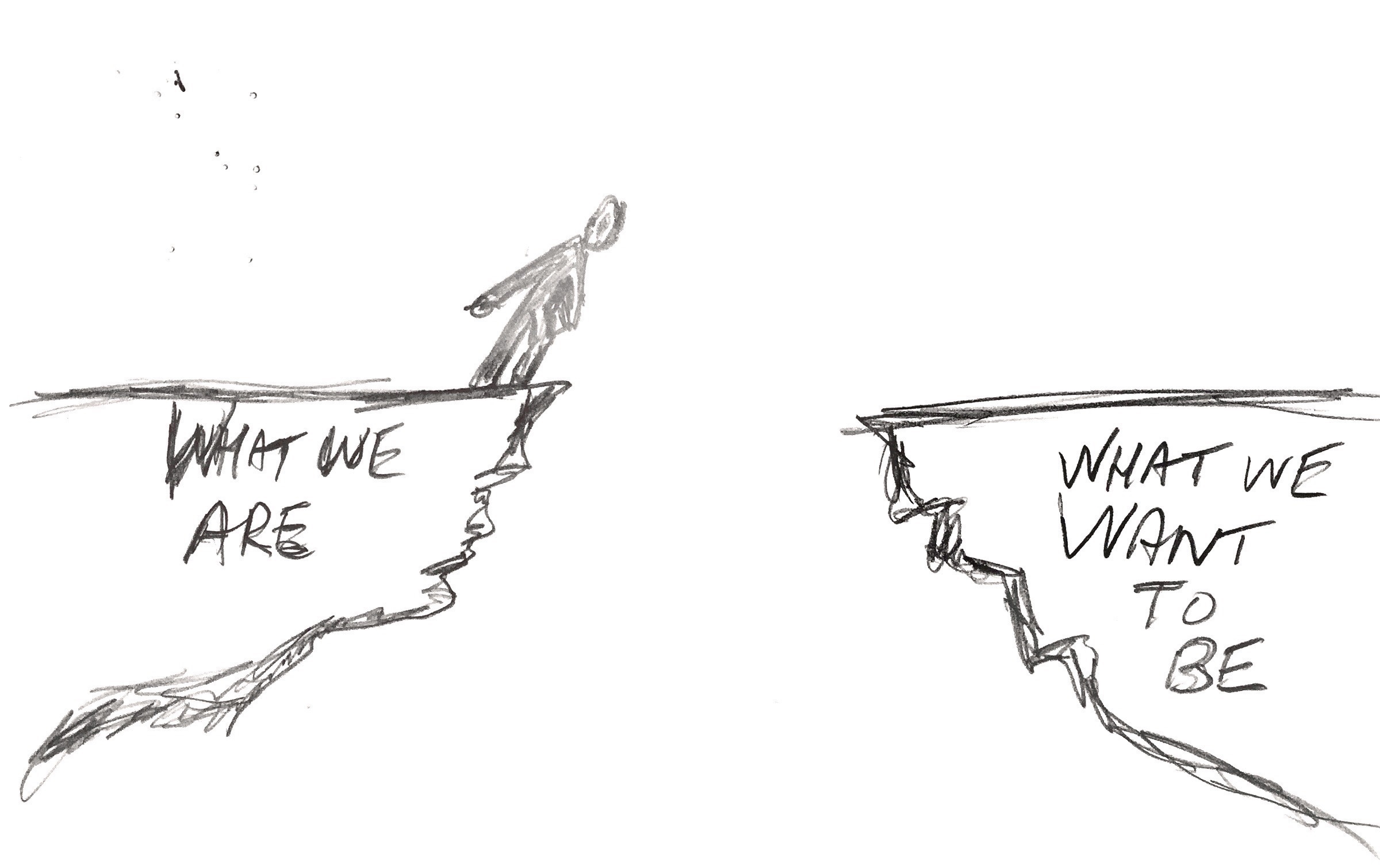 So, what’s the best way to go about “creating yourself”?

I believe it begins by creating a vision.

Everything big begins with a compelling vision—a clear mental picture of what you want.

If you’re in a dark room and you can’t see very well, you take little small baby steps. Why? Because you’re not sure. Things are dark. Unclear.

The more sure you become, the more confident you become, the bigger your steps. The more quickly you can get what you want. But it doesn’t happen without a clear compelling vision. We all need vision.

What happens when you don’t have a compelling vision of the future?

What happens when you don’t have something to look forward to tomorrow? …Or next week? …Next month? …Next year? …Over the next 5 years?

When we neglect to create—and then act upon—a compelling vision; we feel lost, unsure and insecure about ourselves and our lives.

DEVELOPING A VISION HELPS US LIVE WITHOUT REGRET

Bronnie Ware wrote an excellent piece some time ago titled, The Top Five Regrets of the Dying—which is exactly what it sounds like: the 5 most popular regrets people admit to their loved ones while on their death bed:

2. “I wish I’d stayed in touch with my friends”

3. “I wish I’d had the courage to express my feelings"

5. “I wish I’d had the courage to live a life true to myself, not the life others expected of me.”

WE ALL NEED VISION

In his book, First Things First, Stephen Covey writes about how a compelling vision can transform us in every arena of life:

VISION THAT TRANSFORMS AND TRANSCENDS

When we talk about “the passion of vision,” we’re talking about a deep, sustained energy that comes from a comprehensive, principle-based, need-based, endowment-based seeing that goes beyond chronos and even kairos. It deals with an aeon concept of time, from the Greek aion, meaning an age, a lifetime or more. It taps into the deep core of who we are and what we are about. It’s fueled by the realization of the unique contribution we have the capacity to make—the legacy we can leave. It clarifies purpose, gives direction, and empowers us to perform beyond our resources. We call it “passion” because this vision can become a motivating force so powerful it, in effect, becomes the DNA of our lives. It’s so ingrained and integrated into every aspect of our being that it becomes the compelling impetus behind every decision we make. It’s the fire within—the explosion of inner synergy that happens when critical mass is reached in integration of the four fundamental needs. It’s the energy that makes life an adventure—the deep burning “yes!” that empowers us to say “no”—peacefully and confidently—to the less important things in our lives. This passion can empower us to literally transcend fear, doubt, discouragement, and many other things that keep us from accomplishment and contribution.

Consider Gandhi, for example, who came from a background of timidity, scarcity, jealousy, fear, and insecurity. He basically didn’t even want to be with people; he wanted to be alone. He didn’t like working as a lawyer until he gradually began to find some satisfaction in hammering out win-win relationships between opposing people. But as he began to see the injustices against the Indian people, a vision was born in his mind and heart. Out of that vision grew the idea of creating an experimental community—an ashram—where the people could practice egalitarian values. He saw how he could help the Indian people transform their image of themselves as inferior to their British overlords and develop a sense of self-worth. As he focused on his vision, his personality weaknesses were essentially eclipsed. Vision and purpose created personality growth and development. He wanted to love people, to serve people, to be with people. His highest wish was to help redeem a nation. As a result, he eventually brought England to its knees and freed three hundred million people.

Near the end of his life, he remarked,

“I claim to be no more than an average man with below average capabilities. I have not the shadow of a doubt that any man or woman can achieve what I have if he or she would put forth the same effort and cultivate the same hope and faith.”

The power of transcendent vision is greater than the power of the scripting deep inside the human personality and it subordinates it, submerges it, until the whole personality is reorganized in the accomplishment of that vision. The passion of shared vision empowers people to transcend the petty, negative interactions that consume so much time and effort and deplete quality of life.

So many people SAY they're going to write down their goals, flesh out their mission, or work on developing a compelling vision for the future... But most of them never get around to doing it.

Could it be because people don't think it's important? By now you've got to know that it plays at least a small—if not massive—role in your ability to create success for yourself in the future. Okay then; if it's not about that, then what?

One common mistake when it comes to personal development and self-improvement material, is that people approach it like it's a one time deal--when it reality it's the opposite.. You wouldn't expect to be in the shape of your life if you hit the gym one time and said, "Awesome, I've already gone to the gym once this year, so I should expect to have a six-pack pronto." Never happens. Transformations happen by taking small steps daily. And in order to take those steps, you need to know WHERE you're going. This, my friend, is where developing your vision comes in.

Some folks think that developing a clear, compelling vision of the future is so simple that they can get around to it later. They've got "so many important things to do right now." ... Too many emails and demands floating around in their head right now. Too many fires to put out right now. Too much energy wasted on too many insignificant actions that don't even put their strengths to use... They say, "It's so simple, I'll just do it later." I say, "If it's so simple, why not do it NOW?" This is YOUR LIFE we're talking about. Isn't that more important to you than replying to an email about which snacks you prefer having at the next corporate conference? Come on now. Let's get serious.

I want you to do something RIGHT NOW ...

I want you to close your eyes and imagine your life as big as it can possibly be. As big as you’ve ever dared to dream, and then some. Can you see it? Now, open your eyes and listen to me. Whatever you can see, you have the capacity to move toward. And when what you go for is as vast as you can possibly envision, you’ll be living the biggest life you can possibly live. Living large is that simple.

Living like you give a damn really is that simple.

Everything meaningful starts with a vision—that’s the easy part. The hard part is taking consistent action against the inevitable roadblocks that come along the way on your path to living what you envision.