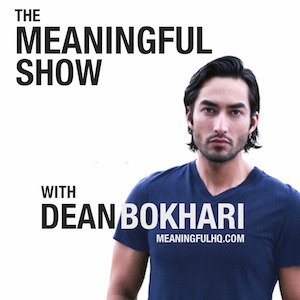 Today’s episode is for anyone who already knows what they want, but can’t seem to get themselves to go for it.

If that’s you, I want to tell you about a story I first heard several years ago that taught me a lesson I’ll never forget... it’s about a French entomologist  who decided to do an experiment with a group of caterpillars — he was interested in seeing if any individual caterpillar would behave in a unique way when placed in certain situations…

So here’s what he does:

He takes a group of about 30 caterpillars into his backyard and lines them up around the base of a large flower pot so that they’re all following one another. ..

After lining them up nose-to-tail around the base of the flower pot until the last one in the circle was behind the first one in the circle — basically making it so that they were all following each other constantly around the diameter of the flower pot — he grabbed a little food and put it close enough to the pot so that the caterpillars could see it and crawl right over in case any of them got hungry.

Then he started taking notes and observing their behavior.

- On the first day, all they did was follow one another around the pot over and over again.

- On the second day, they continued to play follow the follower.

- On the third day, the entomologist began to wonder why none of them hadn’t left the pack to grab some of the food he’d placed nearby. But they kept on playing this game of follow the follower.

- On day four, the guy woke up and noticed that some of the caterpillars had died. But the ones who were alive still continued to follow each other.

- By day seven, every single caterpillar in the procession had DIED OF STARVATION.

Because they were so damn busy following each other that not a single one of em’ had the guts to break away from the social circle in order to nourish themselves!

How interesting… Don’t people  behave in a very similar way? Aren’t way too many people playing this game of follow the follower?

Are YOU playing the game?

If yes, I wanna challenge you today to ask yourself if you are, and to really dig deep looking for the answer.

- Are you stuck in a job you hate?

- Are you in a relationship with someone you don’t really love?

- Do you feel stuck and sort of uneasy because you’re NOT living up to your true greatness on a daily basis?

One of my best friends was just telling me the other day that he really wanted to get into competitive bodybuilding. But it almost felt like he was uneasy about it; like I had to dig it out of him by ask him what he REALLY wanted to do with his life.

It was like he hadn’t given himself permission to feed his own spirit by doing something that he actually loved instead of working as a property manager… Nothing wrong with working as a property manager if it’s what your passionate about, but if you’re a bodybuilder walking into a Long Foster office, you’ve gotta be asking yourself what the fuck you’re doing with your life.

If you’re playing follow the follower I want to challenge you to *stop right now* — don't go quit your job and give the finger to the man just yet — just stop for a second and ask yourself if you’re doing what you’re doing because it’s something that nourishes you physically, mentally, emotionally and spiritually — or if you’re still starving for more.

Because if you’re still hungry you need to find the right food and feed yourself. Otherwise you’ll end up exactly like those caterpillars.