YOUR BRAIN ON BREAD: Book SUMMARY ON GRAIN BRAIN BY DAVID PERLMUTTER, MD 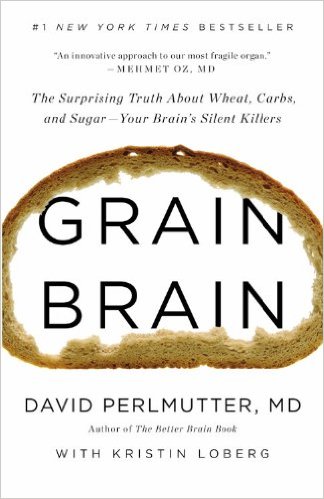 3 of the BIGGEST things that will determine your success in life–regardless of what you’re doing–are:

In this article/episode, we’re going to focus specifically on what you EAT and the type of impact this can have on the way you THINK–and more specifically–the way this effects your brain.

The book I’m pulling this information out of is called Grain Brain by Dr. David Perlmutter (see book summary here).

In the book–which is backed by TONS of science and research about the connection between neuroscience + nutrition–Dr. Perlmutter focuses primarily on one simple theme: how grains/wheat/high-carb diets are destroying your brain—and what you can do about it.

Chronic fatigue. Chronic headache. Obesity. Depression. Anxiety. ADHD. —These are the things that this book can help you with. Today I’m going to dive into a few of my favorite big ideas and actionable insights from the book. (If you want more, you can get the full summary here)

YOUR BRAIN ON BREAD

“…Brain dysfunction starts in your daily bread, and I’m going to prove it. […] Modern grains are silently destroying your brain. By ‘modern,’ I’m not just referring to the refined white flours, pastas, and rice that have already been demonized by the anti-obesity folks; I’m referring to all the grains that so many of us have embraced as being healthful—whole wheat, multigrain, seven-grain, live grain, stone-ground, and so on. Basically, I am calling what is arguably our most beloved dietary staple a terrorist group that bullies our most precious organ, the brain.

This isn’t science fiction; it’s now documented fact. It is my objective in writing Grain Brain to provide information that is sound and based on evolutionary, modern scientific and physiological perspectives. This books goes outside the box of the layman’s accepted dogma—and away from vested corporate interests…

..It proposes a new way of understanding the root cause of brain disease and offers a promising message of hope: Brain disease can be largely prevented through the choices you make in life.

So if you haven’t figured it out by now, I’ll be crystal clear: This is not just another diet book or generic how-to guide to all things preventive health. This is a game-changer.”

Is this guy joking around?

David Perlmutter MD, is one of the few physicians in the US that’s got academic credentials both from the world of Neuroscience as well as Nutrition; giving him the credibility to do what I believe doctors should’ve been doing in the first place—CONNECTING rather than COMPARTMENTALIZING the many parts of the human body—in order to achieve optimal health and well-being.

SO WHY ARE GRAINS/WHEAT SO BAD?

“While it’s well established that processed foods and refined carbohydrates have contributed to our challenges with obesity and so-called food allergies, no one has explained the relationship between grains and other ingredients and brain health and, in the broader outlook, DNA.

It’s pretty straightforward: Our genes determine not just how we process food but, more important, how we respond to the foods we eat.

There is little doubt that one of the largest and most wide-reaching events in the ultimate decline of brain health in modern society has been the introduction of wheat grain into the human diet. While it’s true that our Neolithic ancestors consumed minuscule amounts of this grain, what we now call wheat bears little resemblance to the wild einkorn variety that our forebears consumed on rare occasions. With modern hybridization and gene-modifying technology, the 133 pounds of wheat that the average American consumes each year shares almost no genetic, structural, or chemical likeness to what hunter-gatherers might have stumbled upon. And therein lies the problem: We are increasingly challenging or physiology with ingredients for which we are not genetically prepared.”

Human evolution occurred over a period of a few MILLION years… And at which point throughout this evolution did we introduce grains as a regular part of the human diet?

You do the math: 10,000 years barely puts a dent into the 2.5–3 MILLION years prior to the introduction of common grains.

This then, tells us that we haven’t yet evolved enough to consume the massive quantities of grains that the majority of the modern world includes in their daily diet.

And in the case of humans going from tiny bits of wild grains, to massive loads of genetically modified grains the problems are many.

FEELIN’ FOGGY BRAINED?—IT’S BECAUSE OF INFLAMMATION

”Researchers have known for some time now that the cornerstone of all degenerative conditions, including brain disorders, is inflammation. But what they didn’t have documented until now are the instigators of that inflammation — the first missteps that prompt this deadly reaction. And what they are finding is that gluten, and a high-carbohydrate diet for that matter, are among the most prominent stimulators of inflammatory pathways that reach the brain.

What’s most disturbing about this discovery, however, is that we often don’t know when our brains are being negatively affected. Digestive disorders and food allergies are much easier to spot because symptoms such as gas, bloating, pain, constipation, and diarrhea emerge relatively quickly. But the brain is a more elusive organ. It could be enduring assaults at a molecular level without you feeling it. Unless you’re nursing a headache or managing a neurological problem that’s clearly evident, it can be hard to know what’s going on in the brain until it’s too late. When it comes to brain disease, once the diagnosis is in for something like dementia, turning the train around is hard.”

So, what causes inflammation?

Ever wonder where “food coma” comes from? … Think about the last time you had a meal that made you super tired. I’ll bet you it was one that was very high in carbs.

Here’s the deal: When we decide to introduce inflammation-inducing foods into our diet, we become more susceptible to health issues that can be as problematic as brain fog and chronic fatigue; or as devastating as depression and Alzheimer’s disease.

This one is super interesting…

“When I give lectures to members of the medical community, one of my favorite slides is a photo of four common foods:

(3) a tablespoon of pure white sugar, and

I then ask the audience to guess which one produces the greatest surge in blood sugar—or which has the highest glycemic index (GI), a numerical rating that reflects a measure of how quickly blood sugar levels rise after eating a particular type of food. The glycemic index encompasses a scale of 0 to 100, with higher values given to foods that cause the most rapid rise in blood sugar. The reference point is pure glucose, which has a GI Of 100.

It’s the whole-wheat bread at a whopping GI of 71, putting it on par with white bread (so much for thinking whole wheat is better than white).

We’ve known for more than thirty years that wheat increases blood sugar more than table sugar, but we still somehow think that’s not possible. It seems counterintuitive. But it’s a fact that few foods produce as much of a surge in blood glucose as those made with wheat.”

“Some of my most remarkable case studies involve people transforming their lives and health through the total elimination of gluten from their diets and a new appreciation for fats instead of carbs. I’ve watched this single dietary shift lift depression, relieve chronic fatigue, reverse type 2 diabetes, extinguish obsessive-compulsive behavior, and cure many neurological challenges, from brain fog to bipolar disorder.”

Here’s a question you might have on your mind:

“You’re asking me to give up those warm, fluffy, dinner roles? How could something like that cause depression if it makes me oh-so happy?”

According to Dr. Perlmutter—the answer is YES. And the scientific studies to back up the efficacy of this claim are quite overwhelming.

EATING FAT DOES NOT MAKE YOU FAT

“Interestingly, the human dietary requirement for carbohydrate is virtually zero; we can survive on a minimal amount of carbohydrate, which can be furnished by the liver as needed. But we can’t go long without fat. Unfortunately, most of us equate the idea of eating fat to being fat, when in reality, obesity—and its metabolic consequences—has almost nothing to do with dietary fat consumption and everything to do with our addiction to carbs. The same is true about cholesterol: Eating high-cholesterol foods has no impact on our actual cholesterol levels, and the alleged correlation between high cholesterol and higher cardiac risk is an absolute fallacy.

Of all the lessons in this book, the one I hope you take seriously is the following: Respect your genome. Fat—not carbohydrate—is the preferred fuel for human metabolism and has been for all of human evolution. We have consumed a high-fat diet for the past two million years, and it is only since the advent of agriculture about ten thousand years ago that carbohydrates have become abundant in our food supply. We still have a hunter-gatherer genome.”

OTHER BIG IDEAS FROM GRAIN BRAIN

There are three basic essentials to general health and well-being:

… All 3 of which are also connected to what we mentioned in the very beginning—3 of the BIGGEST things that will determine your success in life–regardless of what you’re doing–are:

If you can get each of these areas handled, you’ll be on track living a more fulfilling lifestyle overall, both personally and professionally.

Listen to the audio version below

If you like listening to the podcast, would you mind leaving me quick review on iTunes?

Get your self-improvement questions answered on the podcast.