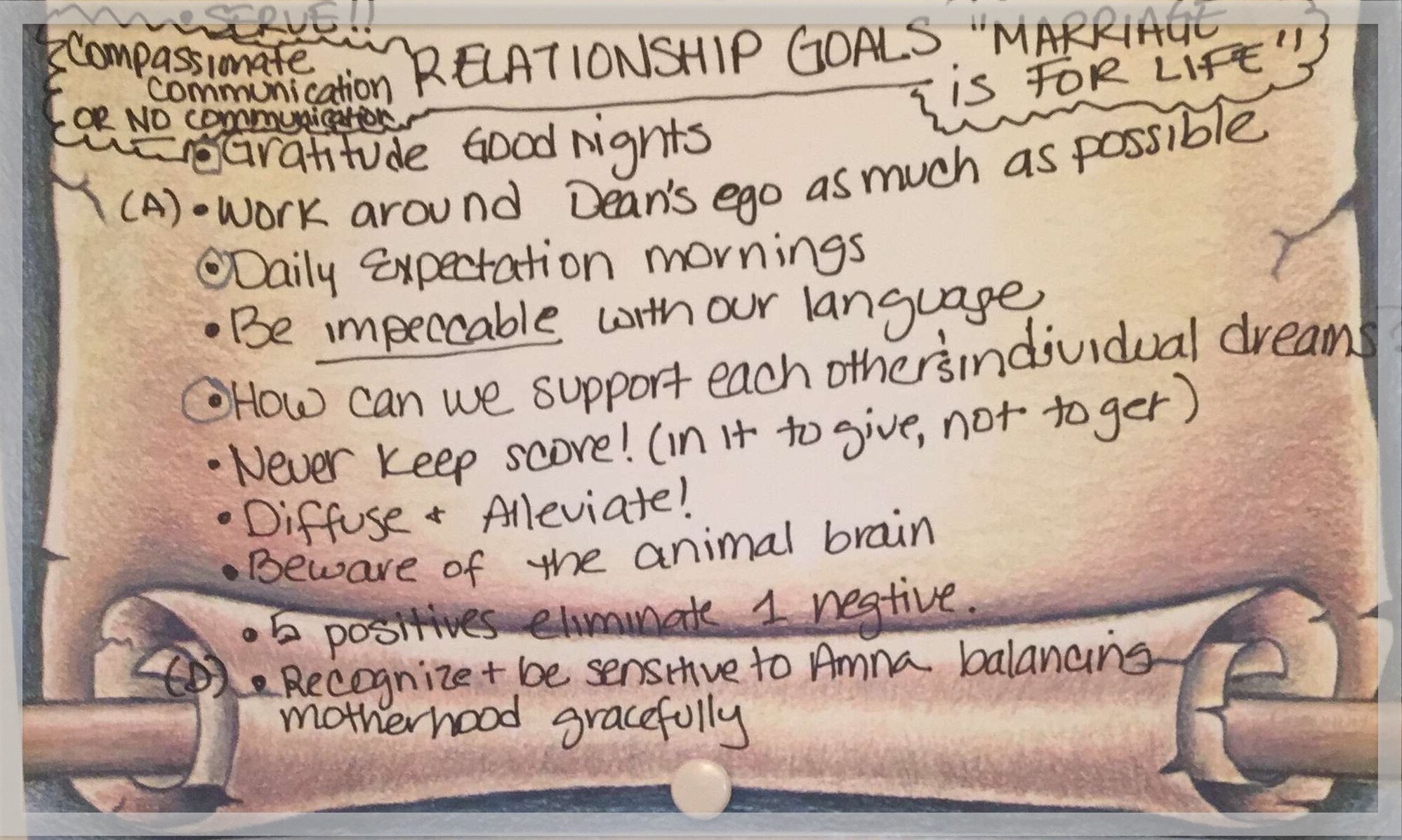 11 tips to have a long-lasting, happy relationship

EP128. 11 TIPS TO HAVE A LONG-LASTING, HAPPY RELATIONSHIP | READ OR LISTEN BELOW • LISTEN ON ITUNES

At the beginning of every year, I like to sit down and do a year-end reflection of the previous year… I think about the wins, the challenges, the goals or areas of my life that I’d like to build upon as I move forward into another new year, and any new goals I’d like to pursue in the year ahead.

One of the things that made this past yearly reflection especially enriching, was the inclusion of my wife, Amna and our newborn, Nora. (I’d always done my yearly reflection totally solo up until now.) So in addition to all of the stuff I usually do during my yearly reflection and goal-setting session, this year I worked on a list of ongoing relationship goals with Amna. We ended up with 11 in total. And we posted them up near our bathroom mirror, so we can glance at them every morning while we brush our teeth.

As I write this, it’s been a little over a month since we started practicing these new ongoing goals (which are more like habits, or mutual commitments than goals). And I think they’ve been incredibly helpful in bringing us closer together as a couple and crushing conflicts before they arise. Here’s our list:

We talk to each other in a level-headed, compassionate way or we don’t talk to each other at all. If we can’t talk to one another with the love and compassion that each of us deserves, then the first one to catch it says (with a smile), “Remember: Compassionate communication or NO communication.” This is usually enough to relax the mood. If not, we mutually decide to revisit the issue once whichever one of us that’s pissed off (and thus, communicating with a lack of compassion) returns to reality.

Every night before bed, we take turns telling each other about one thing we’re grateful for about the other. For example, last night I said to Amna: “I’m really grateful for your patience.”

Every morning we tell or text one another what our individual game plans are for the day. For example: “I’m working till 3pm today.” This is helpful because our schedules can vary from time to time since we both run our own businesses, and it’s courteous to tell each other when we’ll be home or if we’ll be working later than usual on any given day.

Relationships are places that you go to give—NOT to get. I remember a guy once telling me about how he “broke even” after splitting up with his girlfriend. What he meant was that he didn’t spend any more money on her than she did on him. That’s some of the stupidest, most ignorant shit I’ve heard in my life. Never keep score. Your relationship will be infinitely more beautiful because of it.

5. Be impeccable with our language.

This one was inspired by a book my wife and I both love, called The Four Agreements by don Miguel Ruiz. One of the four agreements he discusses in the book, is to “Be impeccable with your word.” Which means this: when you make a promise—keep it. When you say you’re going to do something—do it. Don’t be the type of person who says things that people have a hard time believing. This one serves as a constant reminder to both of us to be impeccable with our word, both with one another as well as with everyone else.

My wife and I are both do what we love for a living. And we’ve both got great dreams and ambitions for continued growth in the future. In fact, I don’t know if I’d be where I am today, if I hadn’t had her full support from the beginning. I think that our ongoing commitment to support each other in our individual dreams has a huge positive impact on our relationship.

7. Marriage is for life.

No one goes into a marriage looking to get divorced… Unless you’re like my cousin in Uzbekistan, who married an American just so she could get her US citizenship—but that’s a different story all together. Anyway, I believe that marriage is sacred. And if you’re going to make that kind of commitment, you better take it seriously enough to understand what you’re getting into before it’s too late. Most people spend more time planning their wedding than they do planning their marriage.

When shit hits the fan—and you know it can hit the fan every now and then—you need to diffuse and alleviate! For example: if the wifey’s feeling super-stressed about something related to her business, and then takes it all out on me for no good reason, it’s probably not a good idea for me to start firing back in defense. Probably better that I realize she’s totally stressed right now, and it’s got nothing to do with me. And the best thing I can do as a husband right now, isn’t to argue or try to fix it, but rather, try to alleviate the situation by listening to her tell me all about it. This ongoing commitment is proven crucial towards maintaining a healthy, happy relationship between the both of us.

9. Beware of the animal brain.

Regardless of how smart we humans think we are, at the end of the day, we’re still animals. We’re just animals that have figured out how to remove ourselves from nature (which I think is a totally screwed up game-plan, but that’s for another discussion). But just because we’re capable of planning ahead, or designing computer chips, doesn’t mean that the very core of our brains aren’t still having an impact on our lives. What I’m talking about, is your “animal brain”. The animal brain is the part of you that says irrational shit when you get mad. It’s the part of your brain that overrides your smarter, more rational self, and instead leaves you saying things that you end up regretting in retrospect. This is why, whenever my wife realizes she may have said something that triggered my “animal brain” to go ape-shit, she knows I probably don’t really mean whatever nasty things I end up saying shortly thereafter. And because she knows that, she gracefully backs away for the time being, until the calmer, cooler version of me comes back to reality. Beware of the animal brain.

10. It takes FIVE positives to eliminate ONE negative.

5:1–that’s the ratio for how many positive impressions I need to make on my wife to make up for telling her she sucks at managing her time. Research supports this. But I don’t feel like finding that research right now, so you can Google it if you want to.

“Give-goals” are specifically tailored ongoing commitments that we came up for one another. You can do the same with your partner. See ours below. (Side note: if you do this with your partner, do it with caution: telling your wife she needs to “stop nagging you about stupid stuff” probably isn’t the most elegant “give-goal” you could conjure up.)

Well, there yah have it! Not an exhaustive list by any means. But I hope you found a few gems in there that you can put to use towards lasting growth and happiness in your own relationship.