Protein Powder, The China Study, and Turning Cancer Off 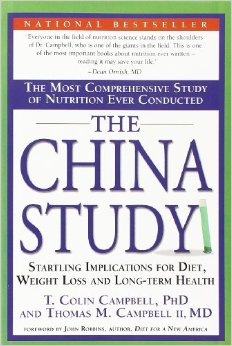 Today I’m super-excited to introduce a new content line-up to the mix—and we’ll be calling it the FlashClass — Big ideas from popular books, condensed into actionable audio lessons, about 5-minutes in length.

Today’s FlashClass is inspired by The China Study, and it’s all about protein consumption…

In case you’ve never heard about the book, The China Study is the largest epidemiological study ever conducted. In a nutshell: 650,000 researchers catalogued and analyzed the death rates for 880 million Chinese citizens—96% of China’s population. Dr. Colin Campbell then, took the findings from the study, and wrote this book so that people everywhere could benefit from the findings… Especially those of us in the western world, who are amongst the un-healthiest people on the planet.

Back to the protein…

Usually when people talk about protein, they’re talking about whether you’re getting enough of it.

But in this book, the authors talk about whether you’re getting the right kind of it.

Here’s why that’s so important…

In a chapter called "Turning Cancer Off,” they tell us that the #1 variable in turning cancer on or off is protein consumption (say what!?)

And after looking at the research, they concluded:

"Dietary protein proved to be so powerful in its effect that we could turn on and turn off cancer growth simply by changing the level consumed.”

BUT, here’s where it gets interesting—there’s one specific type of protein that did NOT promote cancer growth at all, regardless of how much of it was consumed: plant protein.

“plant protein did not promote cancer growth, even at the higher levels of intake.”

“What protein consistently and strongly promoted cancer? Casein, which makes up 87% of cow’s milk protein, promoted all stages of the cancer process. What type of protein did not promote cancer, even at high levels of intake? The safe proteins were from plants, including wheat and soy”

Now, I don’t think I’ll ever go vegetarian, but after I learned about this, I literally threw away my jug of regular protein powder (which was animal based, like most), and bought a quality plant-based protein powder instead.

I also decided to go meat-less 3 days per week.

Your actionable insight from this big idea is simple. Ask yourself: are you getting more animal-based proteins, or plant-based proteins? Adjust your diet accordingly.