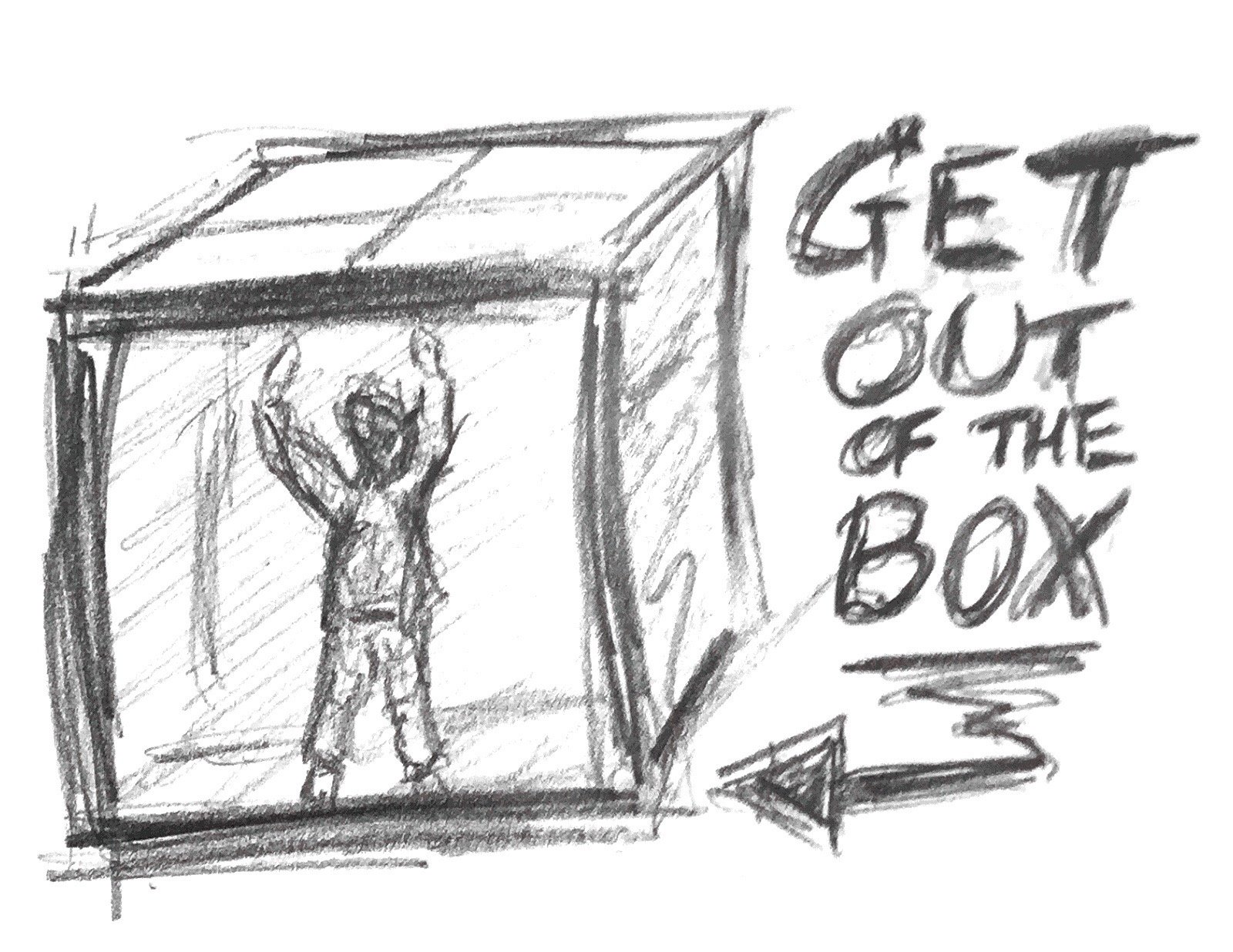 Don't Think Outside The Box

Almost every day, for four excruciating years, I was living in a box…

I woke up to a little digital box sitting next to my bed stand… After slamming the snooze button on my little box, I’d finally rise, get ready, and head downstairs to eat a box breakfast.

Then I’d climb into my box car. Sit in traffic for 3 hours with a bunch of other boxes. Drive to a big box building. And walk into my box of a cubicle.

Then I’d work within that box for a few hours; breaking every now and then for box-related activities of various kinds—like the bathroom box, or the break room box—until it was time to eat my box lunch in a box cafeteria with my co-workers who were also eating out of their very own boxes.

After lunch, I’d head back to my cubicle box to do more unexciting work—which sometimes involved shifting from one box to another or using the phone box to call other people in other boxes to talk about boring box things.

Sometimes though, I’d get so stressed out about catching up on all of my unexciting work, that I would stay in my cubicle box and eat my box lunch while working or talking on my phone box.

Then, at some point throughout the day, when I’m finally starting to look forward to leaving this box of a building and heading to my box house, my boss has the audacity to walk out of his box and into mine—often unannounced—to say something absolutely ridiculous, such as:

“I really need you to think outside the box.”

Are you kidding me?

Think outside the box?

Who does this chump think he is?—telling me to “THINK outside the BOX?”

“How?” I thought, “…how could I think outside the box when everything I do is inside the box?”

I lived in a box.

I worked in a box.

I even shit in a box.

And this guy has the audacity to tell me to think OUTSIDE the box?

That was just one of the many triggers that prompted me to quit my job in pursuit of more meaningful work that I actually gave a damn about.

Too many of us continue to live inside the proverbial box, while being told to “think” outside of it.

If there’s one thing I’ve picked up over these short—but eventful—28 years I’ve spent so far on earth, it’s this:

You cannot “think” outside the box if you live your life inside of one. Click-to-tweet

It doesn’t matter where you stand or how many years you’ve lived. In this moment, you have a choice—you can continue to live the way you’re living, or you can decide to do something different.

Maybe your life is exactly the way you like. Maybe it isn’t.

But I think that most of us have at least something that we want more of in life—more knowledge, more love, more money, more friends, more fulfillment from the work we do…

..I believe that whatever that something is which we want more of in our life experience, we must make moves towards attaining/experiencing/finding it.

What we want could be meaningless to others but miraculous to us.

It might matter more today than it will tomorrow.

It might be something we’ve wanted for a really long time—until we finally get it—and realize we really didn’t want it in the first place.

It could be that we end up learning unexpected—but priceless—life lessons on our way to getting it.

But we will never know until we make a conscious choice to un-cuff ourselves from the shackles of mediocrity and the cuffs of conformity.

The cuffs might seem so real right now—like you’ll never be able to pick the lock and take them off. But in reality, they were never there in the first place.

Everything beautiful begins with a choice.

The choice is yours.

It always has been.

It always will be.